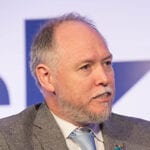 We are pleased to share this guest blog from Jan Kellett, Team Leader, Insurance and Risk Finance Facility at ICMIF partner organisation the United Nations Development Fund (UNDP). The article was written at the beginning of COP 27 which took place in Egypt from 6 to 18 November 2022. The article is reproduced here for the benefit of ICMIF members with the kind permission of Jan Kellett and the UNDP.

The world’s largest annual Climate Change Conference – COP27 – is here with us, and the context could not be more stark.

From record-breaking temperatures in Europe and massive flooding that inundated Pakistan, to droughts that are destroying lives and livelihoods by forcing millions of people from their homes every year – the predictions about the impending impacts of a changing climate are now our reality. People around the world are currently living through the era of ever forceful climate change impacts induced by human activity.

In the United States, climate change is the no.1 risk to insurance firms – adding thousands of dollars to premiums in states like California where wildfires are becoming more common. While climate change will clearly add a major burden to the wealthy countries of the world, they have the resources to adapt and protect homes, infrastructure, and livelihoods. Yet for people like Pat Tiptapmavon in Lao PDR, adaptation is harder. Her small business, based on the selling of food and livestock, was destroyed when three tropical storms hit in 2018. Or for people like Florida Ere, a farmer and a mother of six in Kenya – a changing climate with an increased risk of flooding threatens to wipe out the delicate tea tree crops that sustain her family. This difficult question must now be answered: as climate change tightens its grip, who will cover the growing costs of protecting and rebuilding communities in developing countries across the world?

Climate change also represents a creeping, stealthy threat, causing gradual land loss and desertification leading to reduced agriculture and food scarcity, for example. The risks of further impacts on economies, ecosystems, businesses and people will grow along with the extent of warming. Yet the effects of climate change, including increasingly extreme weather events can also strike rapidly, paying no respect to borders. In 2021, Cyclone Yaas uprooted people in India and Bangladesh in areas already battered by cyclone Amphan the year before. These people were amongst the 22.3 million people forced from their homes in 2021 due to weather-related events, the great majority from storms and floods. And global economic losses from natural and man-made disasters totalled a remarkable USD 270 billion in 2021. Yet six percent of losses related to disasters are covered by insurance in emerging countries, compared to 35 percent in developed countries.

People living in developing countries are least prepared for the consequences of climate change. Look to Haiti, where the United Nations warns that rising sea levels may cause saltwater to permeate farmland and freshwater supplies. To Yemen, where famines resulting from armed conflict are worsened by disasters. Or to the Philippines, Malaysia and Thailand where gradually rising temperatures will increasingly hit the productivity of key sectors, such as agriculture, manufacturing, and tourism. Indeed, women are more vulnerable than men to the impacts of climate change, mainly because they represent the majority of the world’s poor and are proportionally more dependent on threatened natural resources.

It is critical that the insurance industry, the development community, and governments across the world come together even more closely to extend much-needed, affordable insurance solutions to some of the world’s poorest and most vulnerable communities. To this end, a partnership, called the Tripartite Agreement, between the United Nations Development Programme (UNDP), Germany, the Insurance Development Forum, and now 15 of the world’s largest insurance companies, aims to protect the livelihoods and infrastructure on which millions of people depend. This InsuResilience Global Partnership aims to provide 500 million people globally with protection from climate and disaster risk by 2025. The Global Shield for bringing financial protection to more communities and countries will hopefully provide a much-needed impetus into a still massively under-invested element of sustainable development.

Together, we at UNDP are helping countries in three main areas. Firstly, we are taking stock of what can go wrong before a disaster occurs aided by industry expertise, analytics, and risk modelling. Secondly, we are helping to drive sustainable development by speeding up recovery, encouraging financial inclusion, and freeing up capital to invest in crucial areas from a family’s financial security to vital healthcare and education. Perhaps most importantly, we are helping to transfer risk away from families, businesses and countries, through a variety of insurance products and tools. Our work on the Tripartite Agreement could protect financially as many as 80 million people from its first 20 countries of partnership with industry. Our climate is changing, so the insurance solutions must also evolve.

To this end, the Insurance and Risk Finance Facility – a ground-breaking initiative of UNDP, is working with major insurance industry players and governments to build financial resilience around the world. The Facility is already operational in 33 countries with more joining, covering urban risk, agriculture, public assets, natural capital and more. Partnership is central to much of this work. Apart from UNDP’s partnership with industry in the context of the Tripartite Agreement has generated three further major agreements in the last six months: a major actuarial partnership with Milliman; a multi-country, multi-sector engagement with Generali; and a jointly funded challenge fund with the International Cooperative and Mutual Insurance Federation (ICMIF).

The facts are irrefutable: insurance and risk financing saves lives, drives growth, and builds resilient economies, while accelerating progress on the Sustainable Development Goals. Yet lack of access to insurance can tip hundreds of thousands of people into poverty as disasters strike given that many people living in developing countries have little or no means to recover and rebuild. For people like Florida Ere or Pat Tiptapmavon who depend on our natural world to make a living, climate change may determine their future. By extending insurance and risk finance to some of the world’s most vulnerable countries and communities, world leaders can help to ensure that they have a future to look forward to.

The original article was published on 9 November 2022 on the Insurance and Risk Finance Facility, UNDP website.

Building resilience for the most vulnerable