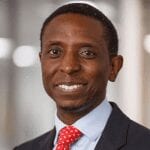 This guest blog was written by Teddy Nyahasha, Chief Executive at ICMIF member OneFamily (UK). Teddy speaks of a shift in people’s attitudes back to mutual core values that he and others working in mutuals are seeing. Teddy believes there is definitely a swing towards being kind to others and that acting responsibly, behaving inclusively and caring for the wellbeing of others is what matters at the moment and he asks the question “Is doing what’s right popular again?”

Our thanks to Teddy for his permission to share this blog with ICMIF members.

Having been seen as unfashionably cause-led in financial circles during the last couple of decades, those of us working in mutuals are suddenly seeing a shift in people’s attitudes back to our core values. Doing what’s right is now popular again.

Maybe it’s a coalescing of the Attenborough effect*, the recent focus on the Black Lives Matter movement and the swing towards kindness that we’ve seen with neighbourliness during Covid-19. However, there’s definitely a feeling in the air that acting responsibly, behaving inclusively and caring for the wellbeing of others is what matters at the moment. For me, that’s a change in the right direction.

Mutuals have a long history of doing what’s right – they’ve been around for hundreds of years – initially as funds that working people would contribute to that could provide help when they were ill or in old age. There were no means of government support in those days, so the mutuals provided an invaluable community service to the impoverished.

Most mutuals are firmly rooted in that ethos. They’re still owned by and for the good of their members, or customers. That social conscience is very much in evidence and it’s what makes us different from the rest of the financial sector. For us, behaving inclusively also means enabling everyone in society to have the same opportunities to access financial products to allow them to save – regardless of how much they’ve got. We use pooling to open up opportunities for smaller savers; unlike some other platforms whose high minimum thresholds effectively discriminate against those who are less well off.

The rest of the world looks to the UK as the founders of mutuality. Yet, with the rush to demutualise in the latter part of the 20th century, the remaining mutuals gradually slipped from sight in this country. Maybe the concept of taking care of people was seen as a bit old-fashioned.

But we’re now seeing a refocusing. ESG is the new buzz phrase and the intersection between what’s good for the environment, society and business stakeholders has become the new hunting ground. Meanwhile most mutuals have simply carried on doing what they’ve always done. Operating with care, empathy and compassion isn’t new to us.

So what’s next? I believe that the mutual sector is more relevant now, in our post-Covid world, than it has ever been.  Everywhere I look within my organisation, I see a passion to get things done, to help our members in their time of need. There’s an energy, a purpose, a reason to be at our desks in the morning. We’re not just turning the handle and saying all the right things. We do it because we want to; mutuality is a mindset.

I think we’ll see a rediscovering of the mutual sector. A financial services sector with a social conscience that behaves in a sustainable way. I think it’s what the world needs right now.

*Sir David Attenborough is a famous British broadcaster, natural historian and conservationist and his latest film, A Life On Our Planet (showing on Netflix from October) provides what many see as a terrifying look at how quickly the planet has been stripped of resources and the devastating impact on the natural world.

The so called “Attenborough effect” refers to a growing desire by people to something positive to counteract the damage done and which continues to be done, whether by being more ‘green’ in their day-to-day lives or by ensuring they invest their money in companies which are trying to reduce the level of damage being done to the planet. Research shows that there is growing interest in sustainable investing because of this.

Letting the genie of digitalisation out the bottle

When the mutual difference really matters