My journey as an ICMIF Young Leader: A box of opportunities! 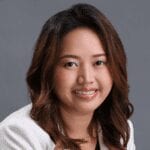 On August 2017, the President of my organisation 1CISP (the Philippines), Roy S. Miclat, recommended that I attend the ICMIF Biennial Conference in October 2017 which was to be held in London (UK). Unanimously, the 1CISP Board of Directors approved my attendance at the event. I did not expect that this approval for me to be part of such a huge gathering of mutual and cooperative insurers from all around the globe would be the start of a “box of opportunities” for me and for my organisation. My journey as an ICMIF Young Leader began to unfold.

During the Conference, I was immersed in the various issues that mutuals and insurance cooperatives around the world are facing and the possible solutions that may be taken to resolve such issues. The topics presented were real eye-openers for me and stimulated many different perspective on the issues presented. Aside from that, the various networking opportunities during breaks and social events allowed me to meet many industry leaders and fellow young leaders. The exchange of business card and short conversations allowed to some extent, the start of new business relationships.

I returned to 1CISP with a huge amount of new information and new ideas. The takeaways from the Conference were discussed in 1CISP’s board meeting with our cooperative’s senior officers and Board of Directors. I was delighted to give a presentation in the meeting on my experiences during the Young Leader’s Programme at the Conference and how valuable the Programme is. I also suggested that it would be great if we could implement similar activity for the Young Leaders among 1CISP’s cooperative member-owners.

The 1CISP senior officers and Board of Directors agreed that it would indeed be a good idea to start to develop the young leaders within our organisation as soon as possible to try to address the leadership gap which currently exists in cooperatives in the Philippines. This agreement became a reality during the 44th Annual General Assembly of 1CISP. In the latest Assembly, 1CISP did not only invite the principal representatives of the cooperative to take part in the Assembly but also their young leaders. This initiative is just the beginning of the promotion of developing our Young Leaders.

Other initiatives to involve the young leaders in 2018 took place through projects such as the Coop Kicks project wherein young innovators and aspiring entrepreneurs pitched their ideas on cooperative endeavors. This new programme features entrepreneurship and technology boot camps. The winners will be coached and trained by the Ateneo Techno hub and co-supervised by the Model Cooperative Network (MCN) and their project will be funded. In addition, the 2019 Annual General Assembly of 1CISP will not only invite young leaders to attend but a dedicated set of activities will await them later this year.

As part of 1CISP’s own Young Leaders Programme, the organisation is also developing its young leaders by sending five young employees to the Youth Summit which was held in Cebu City (Philippines). In addition to this, young rank and file employees who are considered to have high potential are being given opportunities to take on a leadership role by being asked to head or chair a committee for the cooperative’s events.

As a result of my networking with Japanese Young Leaders during the Biennial Conference in London, I developed an idea to visit various insurance cooperatives in Japan. This would help 1CISP to benchmark itself with ICMIF members from Japan and at the same time its senior officers and Board of Directors can network with other cooperative insurance leaders.

On June 2018, said plan came into reality, 1CISP visited JCIF, JCIA, Zenrosai, and Zenkyoren to learn on how they manage their insurance claims, how claims are processed during disasters, and their best practices. Some generously showed us around the Offices and Training Center. Everything went very well with the great help of Asia Oceania Association (AOA).

Through this visit also, I was reconnected with my fellow Young Leaders from Japan whom I met in the ICMIF Biennial Conference. They generously treated me to dinner and we had a night full of stories about our countries’ culture as well as our work practices.

Following my participation in the Young Leaders Programme in London, I was invited in August 2018 to be part of the ICMIF Young Leaders Forum. I feel so privileged that I am the first Asian to be part of the group. I am so excited about this opportunity as it means that I am able to have a voice and express my thoughts about various local and global issues. I would strongly recommend taking part in the ICMIF Young Leaders Programme. It is a great opportunity to network with other young people from the cooperative and mutual sector around the world and also to meet great leaders during events like the ICMIF Biennial Conference. The networking opportunities through the Young Leaders Programme are invaluable and I have learnt so much from everyone taking part in the programme.

The ICMIF Young Leaders Programme is a unique programme which has been designed for young professionals (generally aged between 18 and 35) from mutual, cooperative and member-owned insurers who have been identified by their seniors as strong candidates to become future leaders within their organisations. It will give them the chance to attend the full ICMIF Conference at a discounted fee as well as participate in exclusive breakfast sessions and networking events designed specifically to meet their interests. You can find more information about the ICMIF Young Leaders Programme by contacting Ben Telfer, Vice-President – Business Intelligence, ICMIF.

Building resilience for the most vulnerable

Getting the most out of your organisation’s ICMIF membership: key things to consider as a Young Leader

Young Leader perspectives on the strategic issues in our sector