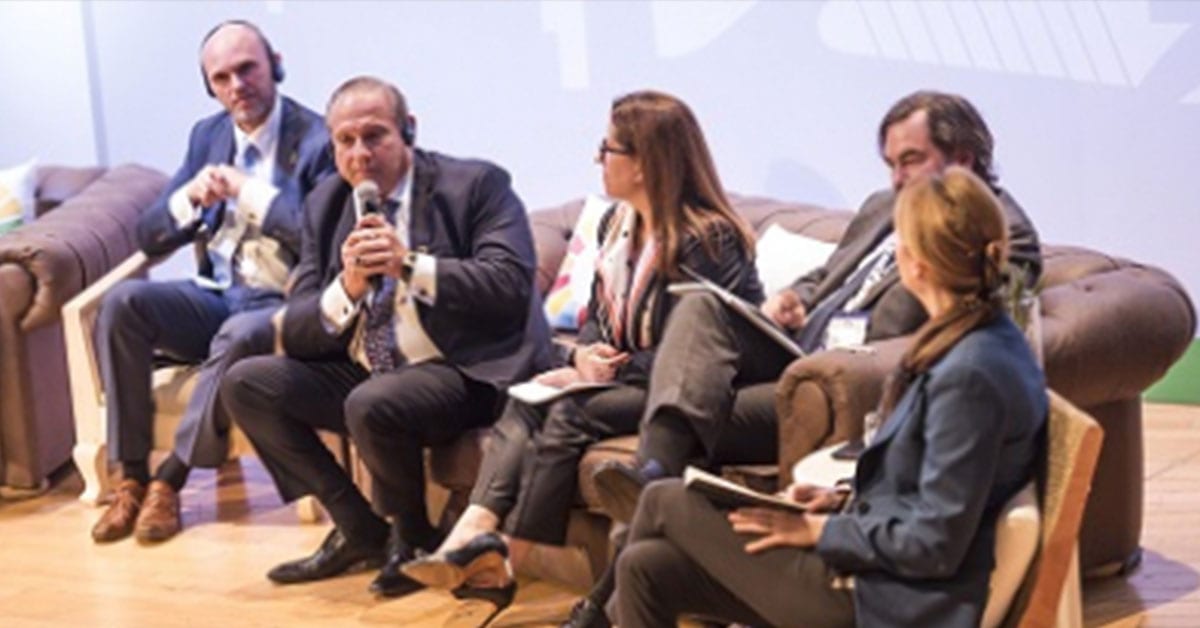 The event took place in Buenos Aires with more than 500 local and global leaders of companies, Argentinian ministers, Secretaries of State, CEOs, high level UN officials, civil society, government officials, and members of the various Global Compact networks from over 60 countries in attendance. The aim of the meeting was to bring together leaders who are committed to achieving the UN Sustainable Development Goals (SDGs) established in the 2030 Agenda and to consider solutions to the challenges of the 10 principles of the Global Compact. Néstor Abatidaga, Corporate Director General, took part, along with other business leaders from Latin America, in the panel called “Integrating human rights into the sustainability strategy of companies” which was moderated by Lise Kingo, Global Executive Director of the United Nations Global Compact and which was held as part of the celebration of the 70th anniversary of the Universal Declaration of Human Rights.

The Making Global Goals Local Business event focused on how, through innovation, companies can create solutions to address the challenges of sustainable development; promote responsible business practices; and take advantage of the new opportunities that will arise out of the SDGs. The United Nations Global Compact brings together more than 9,000 business participants from around the world, with the mission of generating a global movement in favour of sustainable development led by the business sector.

On 23 and 24 April the Annual Forum of the UN Global Compact Local Networks also took place in Argentina, where almost 70 networks from around the world discussed plans for 2030; the future of the Global Compact; and shared experiences of tools and good practices for better compliance with the SDGs. The Forum explored how the Local Networks can play a leading role in facilitating private sector engagement with the SDGs. Attending on behalf of Sancor Seguros were Betina Azugna – CSR Manager of the Sancor Seguros Group, representing the Argentina Network and Maite Lamaison, representing the Uruguayan Network on behalf of Sebastián Trivero (General Manager of Sancor Seguros Uruguay), who chairs the Network in that country.

The Sancor Seguros Group joined the Global Compact * initiative in 2009 and is currently in its eighth consecutive year as a member of the Board of the Argentina Network of the Compact. The Group also chairs the Business and Human Rights Working Group; is an international member of the Human Rights Working Group; and actively participated in the Executive Secretariat for four consecutive years. It also participates in the working groups: “Companies for equality”, “Caring for the climate” and “Companies for companies” (anti-corruption), thus participating in the four axes that unite the 10 principles of the pact (human rights, labour rights, environment and the fight against corruption).

As part of the Sancor Seguros Group’s commitment to the Global Compact and its aims, Néstor Abatidaga, CEO of the Sancor Seguros Group at that time, represented the Argentine Network of the Global Compact for two consecutive years. He was responsible for representing the Argentine Network in its internal and external activities and was the spokesman, alongside other United Nations officials, for this very large public-private CSR initiative in Argentina and the world.

In September 2015, the United Nations presented the 17 Sustainable Development Goals for the period 2015-2030. Since then, both in the private and public spheres, work is being done to propose and specify actions to comply with these universal goals, beginning with those that will have the greatest regional impact. Aligning itself with the UN and the SDGs in 2015 the Sancor Seguros Group decided to define some strategic SDGs for itself which it would then present at the United Nations Leaders’ Summit in New York that year. Leaders at Sancor Seguros and members of the Board of Directors of the Group carried out an analysis of the 17 SDGs, defining which of them were strategically important for the company, and identifying the goals that are linked to insurance and health management, so as to pave the way to start working with concrete goals to collaborate in both the regional and global challenges identified by the United Nations SDGs. This is how 11 SDGs – ranked as either very strategic or strategic – and an additional 45 goals were identified for Sancor Seguros Group’s business.

Based on this analysis, the Group began to work on a project that reaches all areas and operations within the company and which will allow it to align sustainability strategies and CSR programs in all companies and countries where Sancor Seguros operates. In this way they promoted a “Sustainable Citizen” programme across the Group. The programme was to portray the perspective of an insurer covering the areas of insurance and forward-looking conscience; a strong culture of prevention; a healthy lifestyle; ethics in action and concern for the environment.

The “Sustainable Citizen” programme unifies the Group’s Sustainability Strategy; the eleven Sustainable Development Goals chosen and their respective goals; the seven fundamental matters of ISO 26000**; the Principles of the United Nations Global Compact and the participation of associated interest groups.

In 2016 the insurer actively participated in two Dialogues for the SDGs that took place in Argentina, organized by the Governing Board of the United Nations Global Compact, with the support of the United Nations System in Argentina. The first was in the month of April, and Néstor Abatidaga -then CEO of the Group- gave the welcome speech to all participants in the dialogue, urging them to work together for the fulfilment of the 17 SDGs and the sustainable development of communities.

The objective of the first dialogue was to reach consensus on the need and importance of working towards the Sustainable Development Goals from different sectors. There, the CEO of Grupo Sancor Seguros welcomed and addressed the audience stating that “… the SDGs present a new opportunity to obtain solutions from companies, allowing us to demonstrate that in the private sector by connecting the strategies of our business with global priorities, we can contribute to the sustainable development of people, societies and the planet in general.”

In the second dialogue, under the slogan “Building the 2030 Agenda in Argentina”, efforts were made to develop concrete, collective actions.

The Group also represented the Pact’s Argentina network, in 2016, at the Global Compact Leaders Summit in New York, under the slogan “Making global goals local business” with the main aim of encouraging the private sector to move forward on the SDGs.

Likewise, the CSR Manager Betina Azugna of the Sancor Seguros Group, accompanied the key focal person of the Argentine Network for the Compact, Flavio Fuertes, to the Regional Meeting of Networks of the United Nations Global Compact in Mexico. The Argentine Network was selected to present the value proposition of the 14 Networks of the Americas to Lise Kingo, General Director of the Compact.

This year, two days before the “Making Global Goals Local Business” event, Argentina hosted the Global Compact Network Meeting. María Teresa Lamaison attended the meeting where she was representing the Manager of Sancor Seguros Uruguay who currently chairs the Global Compact network in that country (all the Sancor Seguros Group companies present in the Mercosur countries are signatories of the agreement) and the CSR Manager Betina Azugna gave a presentation to Lise Kingo (Executive Director and CEO of the United Nations Global Compact) about the work of the Human Rights Group and companies presided over by Sancor.

Speaking to ICMIF in 2015 about his involvement with the Global Compact Network in Argentina, Néstor Abatidaga said: “I believe that the UN Global Compact is the initiative with the greatest international reach and greatest potential to contribute most to promote social responsibility and sustainable development in all industries. I believe it is the most important CSR initiative in the world today.

“At the Sancor Seguros Group we have been in compliance with the Global Pact for six years, and we have been part of the Executive Board of the Argentina Network for four consecutive years. We also actively participate in the Executive Secretariat of the Argentina Network Board, chairing the Working Group of Businesses and Human Rights, and we are members of the Human Rights Working Group at the international level. All of this is a demonstration of our real commitment to The Ten Principles of the UN Global Compact,” he concluded.

In ICMIF’s Voice magazine in 2016, Néstor Abatidaga talked about the Sustainable

Citizen concept promoted by his organisation, saying that a Sustainable Citizen is someone who is a responsible consumer when it comes to insurance, who has an understanding of the need to avoid unnecessary risks and take appropriate precautions, who tries to have a healthy lifestyle, who brings ethics to bear in the actions they take, and who is concerned for the environment. “Our guideline is to embrace sustainability as part of our way of doing business and to foster an understanding of this in the community,” he said.

* Launched in 1999 by the Secretary General of the United Nations, Kofi Annan, and officially launched in July 2000, the Global Compact is an initiative, in which companies commit to align their strategies and operations with ten principles universally accepted in four thematic areas: human rights, labour standards, environment and anti-corruption. For this, through the association of companies, United Nations agencies, labour unions, non-governmental organizations (NGOs) and other actors, we aspire to build a more inclusive and more equitable global market.

The Argentine Global Pact was launched on April 23, 2004. It promotes the adhesion of the Argentine private sector to ten fundamental principles in the fields of Human Rights, Environment, Anticorruption and Labor Standards, thus promoting the transparency of organizations through the presentation of voluntary reports, thus creating a broad movement of companies and organizations interested in Sustainable Development.

The Global Compact Argentina is the most inclusive network, and promotes the participation of all the actors in the agenda but focusing on the company. Currently has more than 700 participants, being the most federal network in the country with at least 1 signatory in 20 of the 24 Argentine provinces.

** ISO 26000 is the international standard developed to help organizations effectively assess and address those social responsibilities that are relevant and significant to their mission and vision; operations and processes; customers, employees, communities, and other stakeholders; and environmental impact.

Integrating the SDGs into business strategy