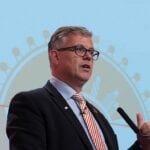 The United Nations (UN) Sustainable Development Goals (SDGs), as signed by all UN Nation States in 2015, are a framework by which humanity should live. They protect the planet and all those who live on it and the aim of the UN in creating the SDGs is that they reflect the values by which humanity should be measured. The SDGs have to be applied by governments and nations by law, but my belief is they should equally be applicable to business and to each and every citizen on our planet. To borrow the phrase often quoted by Argentinian ICMIF member Sancor Seguros, an ardent supporter of the SDGs: “we want to help people become sustainable citizens”.

In my view, the 17 SDGs should be the framework by which purpose-led businesses measure their success. Yes, it is important to run an efficient and profitable insurance business, but in the long term, if we don’t look after our citizens and the planet, there will be no business at all. Mutuals and cooperatives are, and always have been, the epitome of purpose or values-led businesses.

However, as the market trend is increasingly towards embedding sustainability in all businesses, we are seeing many more organisations moving into this space and purporting to be sustainable or purpose-led. Some of these are doing the right thing but many are just following the trend with ‘green washing’ strategies to make them look good. The advantage we have as mutual and cooperative insurers is that we have the authenticity, integrity and history to support our claims of being sustainable. We now have a framework (the SDGs) to showcase our authenticity, enabled by our cooperative and mutual heritage.

Some ICMIF members recognised early in 2015 that the SDGs would be “game changers” for the mutual/cooperative sector and engaged with the appropriate UN bodies and other partner organisations (SDG 17 is about partnerships) to champion the SDGs as they relate to the insurance industry.

By the end of 2018, we had ten ICMIF members reporting against the SDGs and by 2019 this had doubled to 20 members. I anticipate this will be 30 plus for the 2020 year-end. What might once have been called a trend is now better described as a permanent move to create a better world.

Many more ICMIF members are now on the journey to embed the SDGs in their business. It is not as onerous a task as some might imagine. Many ICMIF members have already discovered that, thanks to their inherent mutual values, they are already doing a lot towards the SDGs. They just had not formulated this work specifically within the framework of the SDGs or built a sustainability strategy from the Board level down and throughout their organisation. As I have often said, the SDGs are a gift to the mutual and cooperative sector as they allow us to showcase our mutual difference in all its forms.

As the world gets ready to make their national commitments at the 26th UN Climate Change Conference of the Parties (COP26) scheduled to take place in Glasgow (UK) in November 2021, we are seeing a rush within the insurance industry to also make commitments and show real action for change.

We have also partnered with ICMIF Supporting Member Swiss Re to co-create an SDG calculator (due to be launched in Quarter 4 this year) to give every insurer a benchmark upon which to embed and progress the SDGs in their own organisation, whilst at the same time reducing green-washing.

Lastly, several of our members are already heavily engaged with the Net-Zero Asset Owner Alliance, which was convened by UN Environment Programme Finance Initiative and the Principles for Responsible Investment, which is focused on ensuring that investments are sustainable in the long run by committing to a net-zero investment portfolio.

There is always much to do for insurance organisations in this increasingly fast-paced industry but embedding the SDGs in our businesses complements our mutual/cooperative DNA perfectly and we already have a “mutual” advantage here which we must embrace and, that way, continue to lead in this field.

The future is filled with purpose

Integrating the SDGs into business strategy