The future is filled with purpose 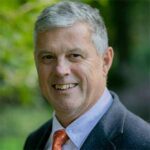 “The pessimist complains about the wind. The optimist expects it to change. The leader adjusts the sails.” – John Maxwell

This is the year that we come together to celebrate 100 years of ICMIF’s members leading the insurance industry. Whilst the past few years have been challenging, ICMIF members have continued to ‘adjust their sails’ in the face of adversity whilst demonstrating that leading with purpose is not simply something we do; it is in the very nature of our business.

Back in 2007, when ICMIF hosted a series of ‘Modern Mutuality’ seminars looking at the future of mutual insurance, there was one slide I used to leave the audience with. I called it the ‘dominant business culture’ (see image below). The narrative that went with the slide was that business culture is cyclical. So back in the industrial revolution era of 1840-1890, capitalism was the dominant business model. Then, with the rise of the workers and trade unionism, we saw a golden era of mutualism as the predominant business model between 1890 and 1940. Moving on to the post-war era, governments stepped in to rebuild society and infrastructure and we saw a wave of nationalisations from 1940 to 1980. Lastly, came the next wave of capitalism driven by Thatcherism and de-nationalisations seen between 1980 and 2020. 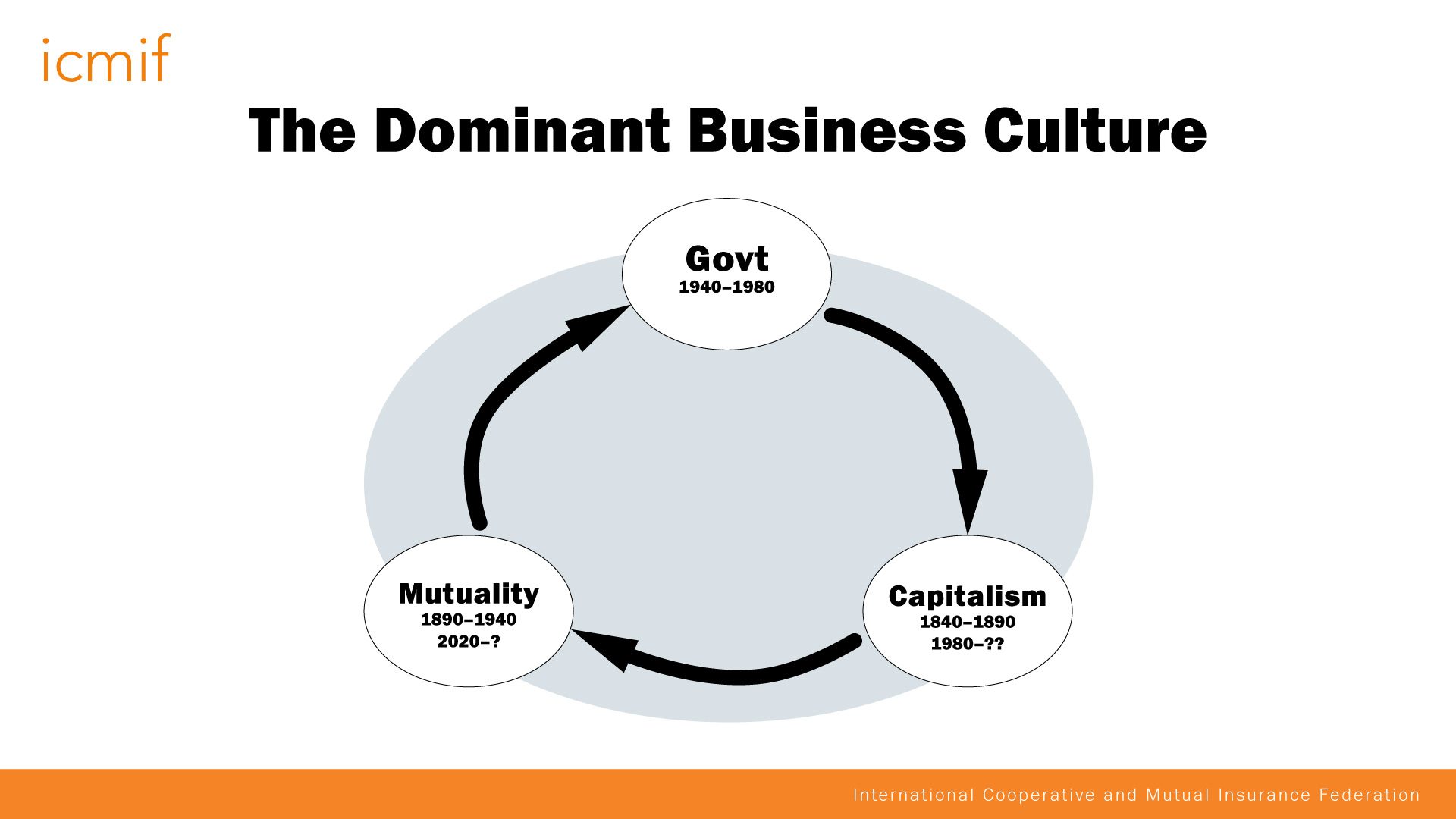 All these cycles have lasted about 40-50 years and it was my belief, 15 years ago, that the capitalism era would begin to wane around 2020 and that mutualism would see a revival. I believe we are seeing the beginnings of that now. Most businesses want to be seen as sustainable and purpose-driven. Increasingly, we are hearing terms like stakeholder capitalism, with B-Corps being very in vogue. Shareholder companies are competing to show how much they care about communities and climate change. In short, most businesses are trying to embed the values that mutuals hold so dear. They too want to be seen as caring for people and the planet.

Is this a good thing for the mutual sector? I believe it is good, because we in the mutual sector have first-mover advantage. We already have purpose-driven strategies and, what’s more, we have a trusted reputation that we can build those values on. But we can’t stand still, the rest of business world is fast catching up and covets the values that mutuals have.

One obvious example of this is greenwashing in sustainable investments. At COP26 in Glasgow last November, the announcement that grabbed the most headlines was that USD 130 trillion is invested in sustainable investments under the Glasgow Financial Alliance for Net Zero (GFANZ) announced, to great fanfare, by Mark Carney. This is supported over 4,000 signatories to the UN Environment Programme Finance Initiative (UNEP FI) Principles of Responsible Investing (PRI) representing USD 130 trillion in assets under management (AUM). The next level of commitment for the UNEP FI PRI signatories is the UN-Convened Net-Zero Asset Owner Alliance (NZAOA), however, there are only 69 (less than 2%) signatories of THE NZAOA representing USD 10 trillion (less than 8%). Of these 69 organisations, less than half (33) are insurers and, unsurprisingly, 15 are mutual insurers, most of which are ICMIF members. So, given the committed 69 are 8% of the USD 130 trillion, I believe that means 92% are green-washing and their signatory is merely corporate branding.

If we are to use the ICMIF number of USD 576 billion which are aligned to sustainable investment frameworks, as announced during COP26 from total AUM of USD 1.7 trillion this is 34% of total assets. So, if other members of the NZAOA are at the same level (which I doubt they are) then USD 3.4 trillion (2.5%) is the sum total of sustainable investments from the USD 130 trillion announcement made by GFANZ. A point not missed by António Gutteres, Secretary-General of the UN and several other prominent leaders. So that is a lot of green washing!

Despite the above, the momentum and direction of travel from the USD 40 billion invested in 2013 (according to a World Bank report) shows how far we have come, almost 100-fold increase, as well as how far we have still to go.

Apologies for the long-winded examples, but I believe they highlight the challenge faced by the whole insurance industry, to not only be seen as credible but also be trusted when it makes commitments and announcements that sound so good. I believe, we in the mutual sector have a major role to play in rebuilding trust in the industry by eliminating negative issues like greenwashing.

Our sector also has a major leadership role to play in helping realign the whole industry to be purpose-driven and showcasing the societal value of insurance to communities and countries. Insurance started out as communities coming together to share life’s big risks by mutualising them. Unfortunately, the commercialisation has gone too far, resulting in insurance being one of the least trusted industries in the world. Which is ironic, when all we sell is trust by way of a promise to pay when something bad happens!

It is therefore beholden on the mutual sector, the most trusted part of the industry, to lead the way in the new purpose-driven stakeholder capitalism movement. There is a burning opportunity for mutual values to be the dominant business cycle for the next 50 years.

The ICMIF Centenary Conference in Rome (Italy) in October 2022 is just the platform we need to catapult mutuality to the forefront of the insurance sector. We are leading in many areas of the sustainability arena, as noted above we lead in sustainable investments; we are leading in prevention and resilience initiatives; and we lead in terms of embedding the UN Sustainable Development Goals (SDGs) as well as inclusive insurance. All of these will be subject of much debate and discussion at the Rome Conference where we will be joined by our Supporting Members, partners and other key stakeholders who are on similar crusades to rebuild trust by doing the right thing and fulling our societal role to protect, but more importantly these days, prevent.

It is a big task, but one I know the mutual sector is ready for. My wish is that 2022 is not only about our centenary but also about the next century and the increasingly important role mutual and cooperative insurers will play. With a fair wind behind us, we will sail confidently into the next 100 years, driven by our values and our purpose.

Leading with purpose and the future of our industry